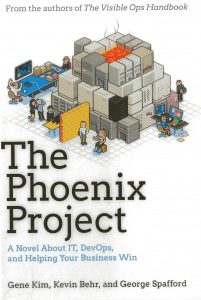 Are you a developer? Do you like buzzwords? Do you want higher wage? Learn some automation tools and Linux server administration skills, call yourself DevOps expert. You’re welcome.

Jokes aside, DevOps (again, I’m still not sure what that means) is a pretty popular term to throw out these days. As far as I (and Wikipedia) know, the term itself doesn’t refer to a job title, or a description, but it refers to a practice of collaboration and effective communication between IT and software developers.

Being a term that’s very enterprisey, I honestly have zero clue about it. But you know, admitting you’re stupid is the beginning of being smart, so I started my attempt to find out more about it.

How? Well, like all things these days, all questions lead to either Quora or StackOverflow, so my search of “What is the best book to learn about DevOps?” lead to this Quora thread, that recommends a novel, out of all things, to learn the basic of DevOps.

The novel, is called The Phoenix Project. It has a pretty awesome cover, and looks easy enough to read, so I decided to get it and start reading.

To be frank, The Phoenix Project might just be one of the worst piece of fiction that I’ve ever read. There’s simply no care given to the storytelling at all. All the characters in this book exist in the world to simply function as a container of enterprise buzzwords and best business practice, and to do some Q & A between each other in order for the reader to understand what the book is trying to teach you.

That being said, I do appreciate that this book, and the way it’s written, although very close to failing, have successfully avoided becoming just a bad infomercial product like AOL trying to teach kids how to use the internet in the 90s. There’s still attempt to build the character’s personality and background, and drama and suspense are written in a competent manner.

In fact, being a guy who deals with these kinds of crisis and use a kanban board to deal with them every day myself, the drama and problems being faced by these characters in the book, are pretty much the only thing that makes this interesting. Unfortunately, i’m not sure if average joe feels the same way.

Devops, being more of a philosophy (like agile –please read this the way Marco Arment said the word “brand”), I’m not sure reviewing it is wise, for me. I’m just simply not in a level to say any smart things about it. Maybe later.

But the book. Well. Isn’t it funny that every single important person in the book have some kind of military background? And if there’s such a thing in fiction as a magical negro, this book introduce me to a new concept in fiction called a magical startup guru, his unique characteristics being speaking in riddles, respected by everybody in the world, rich as fuck but dresses like a hobo, and calls everybody the wrong name until he deemed them worthy of his respect.

I’m not in itself opposite to DevOps, again, I don’t have enough competency to have any opinion about it, but to me, the most interesting thing about this book is the question it raises in my mind. Is solving a problem in the enterprise as easy as this?

Now don’t get me wrong, this book does illustrate pretty well how bad communications and distrust between separate elements in a company can wreck things. But the book fails to highlight why DevOps is a unique and the best solution in solving this. In one short scene, this book does mention ITIL, which is apparently an old set of practices for IT in a business settings, but it doesn’t say or have any opinions about it.

Plus reading this I can’t stop and think that all the issues that the company face is just a failure of the CEO, which I honestly forgot the name of. It’s good that he apparently realized his mistakes, but the way this book deals with his leadership issue is similar to the way it deals with all of the issues. It just hides them under the rug, things just suddenly change for the better. Because of what? Devops?

And that infosec guy. Holy shit, does his personality, and his physical looks change suddenly right at the end of the book. Convenient.

Anyway, if you’re curious about DevOps, read this book, maybe? I don’t know. I’m still not sure why the quora thread recommended this book, probably say more about an IT person’s taste in fiction than anything else.