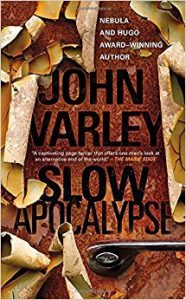 Here’s the odd thing about the apocalypse: it’s the one scenario that hasn’t happened yet, and might not happen in our lifetime, and yet we human race have a very deep obsession with it. Throughout the history, every generation of tribes with their own system of belief have their own picture or imagination of what the apocalypse will entail. For a long time, the imagination is maybe a mystical deity, in the form of an evil monster, will appear, and then later followed by the figure of savior.

For millennials, the apocalypse seems to mean a world without electricity.

And this exact scenario has been in fiction so many times, I don’t even know if it’s truly possible to bring something new to the table. In fact, it’s been so played out that in television history there’s this tv series with the exact same plot, you know, a world without fuckin Twitter, what would we do, and it failed harder than a pet food startup in the dotcom boom.

And Slow Apocalypse, a novel about the exact same scenario playing out, except the disappearance of electricity is more of a side effect of a world without fossil fuel, is the book that I intend to review today.

I say intend, because to be honest, I’m not much of a reader but if there’s one novel that I’ve read in all my life that’s so well written, so detailed, and so lush with geographical details of a city I have never visit, and yet it’s the exact definition of the sentence, “nothing to write home about”, it’d be this novel.

And I’m not sure, really, what the problem is. I’ve never read Varley’s work before. In fact, looking at this book, oddly enough made me want to read his other works, just to make sure that my assumption is correct. That this one is the exception. That this might just be an old man getting pissed off at the price of gas skyrocketing at one point in history and decided to write a preachy version of a Los Angeles map description with some characters to fill in the blanks. Maybe it’s just an anomaly.

Anyway, Slow Apocalypse. The main character is this screenwriter named Dave who is worried a lot. He’s worried about the fact that he’s a rich fucking man living in Los Angeles but his wealth is dwindling. The problem is the genre where he’s operating, Sitcom, is a genre of the youth, and he’s getting old. In fact, Varley has this one character, named Bob, that is a pretty good projection of what will happen to Dave in the future. An old man who used to write comedy but has lost all of his sense of humor, and just turned into Gandalf, the wise old man who advise the groups on everything. Except Bob has an eyepatch. And a cane. Oh wait Gandalf has a cane too. I think.

Anyway, the problem with Dave is that in the middle of his success, his wife turned into this caricature of a Hollywood wife who doesn’t care about anything or anyone. Oh no wait she does care about hungry children, she just solves the issue with excessive shopping habits. But really, before all this, her wife is amazing. She can outmaneuvered an Arabian rug dealer, she can cook, she was basically a perfect caricature of a housewife.

Now Dave, who is busy trying to find the next big story, finds himself thrown into a huge government conspiracy in which an ex-military man got shot in his apartment for showing him a satellite image of oil fields around the world getting blown up by a mysterious bacteria.

The bacteria is killing all the oil fields, turning them into a huge ball of fire, and is airborne. Soon, all the oil and natural gas fields around the world would be useless, and before the guy got shot and thrown out the window, the military man, who is a drunk, of course, advised Dave to take care of his family.

At first, Dave is thinking exactly like a character in a book usually thinks about conspiracy. He thinks the guy’s a crank, of course. But the fact that the man got killed, made him believe the accuracy of his story, that the world is indeed, coming to an end.

So dave did follow the man’s advice. He prepared. He bought scooters, bicycles, toilet papers, canned food, and all the things that you need in an apocalyptic world where there’s no electricity. And his daughter found out, his friends found out, they all believe him.

Except for the wife. But no worries. Once the world finally comes to an end, she believed him, and they all realized, once again, how important family is. And so it begins. The journey of Dave and his family against the world. By the way, the wife by now has turned into a caricature of a post-apocalyptic housewife. And the kid, well the kid is nothing interesting either. She just cared about her horse a lot. Still, all these apocalyptic settings, his background as a screenwriter that’s not supposed to know anything about survival, should make all this interesting, right?

Unfortunately, it’s not. As a reader, I see glimpses of drama here and there, but the pacing of the plot got ruined by the very specific details of Los Angeles landscape. I’m sorry, but I don’t care what road is beside which intersection closed to which areas of interest when the main character is literally driving in a Vespa holding a shotgun looking for baddies to pop up. The thrill of that should be highlighted more than anything else.

Yes, we get it, the fact that Los Angeles got ruined is a pretty big deal. Collapsing building, skyscrapers at that, is a fucking big, scary deal that in itself can be the main plot of a story, but this creates an imbalance in the novel itself. Is it the story of Los Angeles, and how the citizens of it deal with the aftermath of an apocalypse, or a story about Dave, the ex-sitcom screenwriter and his way of dealing with the apocalypse?

And the fact that his experience writing sitcom is being used as kind of this Chekov’s gun that helped resolve the ending, is infuriating. Not once in the middle of the novel has the sitcom been described in a meaningful way or used as one of the instruments that helps Dave deal with the apocalypse, but then in the ending suddenly it matters. The way those people who’re trying to judge whether or not Bob & Dave’s Group of Apocalypse Survivors can live in the lake described the plots of some episodes of the Sitcom that Dave wrote is…cringeworthy at the very best.

I know that I’m describing this novel in a very abstract way, but I’ve just finished the book, and really this is an impromptu review. I spend two days non-stop reading it hoping that maybe something would happen. Something exhilarating, something that’s not predictable, something that’s worthy of the setting. But it’s not. What I got is more explanations of what kind of building is on Rodeo Drive and how awful they look now that the world’s gone to shit.

But still, are there any good points about the book? Well, as I’ve said before, it is well written. And by that, i don’t mean the structure, because the structure is typical in its three act nature, and the pacing’s awful, but the way it’s written, I don’t know. It’s indeed a page turner. Varley knows how to build suspense, and keeps your head filled with big expectations of what would happen next.

When I first found this book and started reading it, I wonder at the significance of the title. Slow apocalypse. What does that mean, really? An apocalypse is a sudden jerk of unfortunate occurrence that pulls you in its tail. It is surprising, it is non-stop. Until you either die or survive. And by all of that quality, the apocalypse described in this book filled that role perfectly.

But it turns out the slow in Slow Apocalypse doesn’t describe the apocalypse itself. Instead, it described nothing. Yes, I know you expect a grand revelation from me, something smart to conclude this review. But no. Like this book, there’s no grand revelation here, only the message that you should not start a novel when you’re angry and just came home from a Greenpeace meeting.